Treasury says borrowing needs increased by $262 billion
Associated Press 2022-08-01 22:30:50
The Treasury Department is seeking to borrow $444 billion in the current quarter through September as the Federal Reserve tightens its portfolio

WASHINGTON (AP) — The Treasury Department is seeking to borrow $444 billion in the current quarter through September as the Federal Reserve tightens its portfolio. 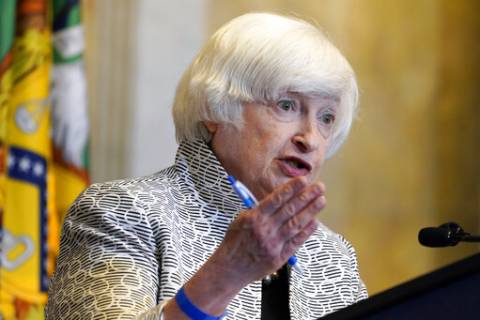 Figures released Monday by the department show that to be a $262 billion increase compared to estimates announced in May, a sign that the federal government will need to be more reliant on debt.

A Treasury official told reporters on the condition of anonymity that the department was now expecting to collect less in taxes than initially forecast. The additional debt during the July to September quarter is also due in part to the Fed's decision in May to scale back its holdings of Treasury notes, which caused the government to rely on private and foreign investors.

The changes come at a moment of uncertainty for the U.S. economy. Many economists think a recession is on the horizon, with inflation eating into Americans’ incomes and the Fed aggressively raising interest rates to lower inflation in ways that could reduce economic growth. For the first half of the year, U.S. gross domestic product has declined.

The Congressional Budget Office said last week that while higher tax revenues and other factors have caused the federal debt this year to be lower than forecast, spending commitments could imperil the U.S. economy's 30-year outlook.

Maya MacGuineas, president of the Committee for a Responsible Federal Budget, said “excessive borrowing exacerbates rather than pushes against inflation.

“If you’re trying to reduce demand, borrowing makes inflationary pressures worse,” she said. This is just a reminder that structurally we’re not in a balanced situation.”